Old world bollworm risk to US borne out

Home / Old world bollworm risk to US borne out 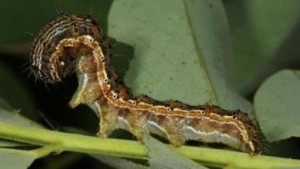 In July, theÂ South East Farm PressÂ reported that aÂ male Helicoverpa armigeraÂ (old world bollworm) adult had been detected in the Cooperative Agricultural Pest Survey survey in Florida. Â [Latest reports have updated this to three adult male moths trapped]. Â This species poses a threat to a very wide range of crops, and has a global reputation for developing resistance to pesticides. Â Pest risk modelling presented to the Entomology Society of America last year and published recently by IPRRG members in PLOS ONE, indicated that the majority of theÂ agricultural production zone in the USA is climatically suitable for H. armigera establishment, and much of the cropping zone in Canada is at threat from seasonal incursions should it spread throughout its potential range. Â The publication in PLOS ONEÂ indicated that since H. armigera established itself in South America, the invasion of North America was likely just a matter of time. Â The journal paper also highlighted that the invasion of North America would probably involve natural dispersal from Central America or the Caribbean – fundamentally changing the nature of the biosecurity threat. Â Depending on the re-invasion frequency and the costs of an eradication, natural dispersal of pestsÂ can undermine the value of eradication efforts. Â This Â places greater value on attempts to slow the spread of the pest, and to bolster the effectiveness of integrated resistance management strategies. 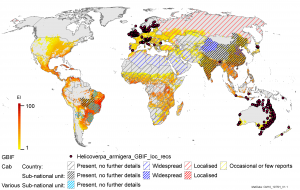 The current and potential distribution for establishment of Helicoverpa armigera (Kriticos et al. 2015, PLOS ONE).

This site uses Akismet to reduce spam. Learn how your comment data is processed.